A retired New Jersey orthopedic surgeon has authored a book offering a plan for a new American health system.

“The Informed Health Plan Act of 2017: A New Healthcare Delivery System for America,” published in mid-May and available through Amazon, is a 143-page blueprint outlining what Dr. Robert Dennis hopes will be the replacement for Obamacare. Dennis, 70, a board-certified orthopedic surgeon who now performs expert witness and other non-clinical office work, said political candidates have been railing against the Affordable Care Act since its 2010 passage.

“Millions of people want Obamacare replaced. But with what? Nobody’s put forward any plans,” he said. “And the only idea I’ve heard proposed is allowing insurance companies to sell across state lines. Well, that’s good and it’s in my plan, but it’s not enough. But that alone won’t fix anything.”

Dennis conceived of what he calls the “Informed Health Plan” in 2010, but thought after the ACA passed, his plan would have no chance. “I put it on a shelf and thought it was hopeless,” he recalled.

So he said he’s refined his original plan and plans to send copies to state and federal legislatures. He’s calling his plan “a replacement package for Obamacare. We can preserve the good parts, but shed the bureaucratic burdens.” If someone orders a copy of his book at informedhealthplan.com, Dennis will send one to the purchaser’s legislator.

He predicted that if adopted, his plan would save $1 trillion within three years and patients will see their health expenses cut in half. However, he conceded that he did not hire actuaries to perform the projections.

Dennis estimated that up to 40 percent of the cost of healthcare is wasted in administrative burdens.

“My plan addresses one of the major failures of Obamacare: the incredible reporting requirements that all my peers are complaining about. That paperwork requires an incredible amount of data that has no medical value. And you’re requiring physicians, who get paid the highest now in our healthcare system, to perform the lowest level of data output,” Dennis explained.

“It’s the administrative bureaucratic mindset that’s killing our system. My plan reverses the unnecessary complications in medical care. I’m putting the free market back where it belongs.”

He said under the current system, physicians are serving public and private insurers, not patients. “This puts the consumer back in control over how he spends his money,” Dennis said.

He explained that care delivery will be divided into catastrophic and elective categories. Catastrophic care — life-and-death emergencies and conditions like heart attacks and cancer — will be free to patients and paid for by the government and private health plans.

Elective care will cost, but consumers will only pay a 10 percent co payment. So it’s in their interest — and the interest of their insurers — to shop for the best-quality providers who charge the lowest prices. Dennis said that under his transparent system, providers will post that data publicly.

“My plan eliminates Medicaid, deductibles and unnecessary administrative fees and pours that money into the delivery of actual medical care. Physicians don’t have to hire all that extra staff to handle the paperwork,” he said.

The estimated $50 billion to $80 billion wasted annually in fraud would greatly diminish because patients would see their bills and refuse to pay inflated fraudulent claims.

“Fraud is harder to do when the buyer and seller are brought together and are responsive to each other,” Dennis said.

Dennis has practiced medicine for more than 40 years and has held leadership positions in hospitals and medical societies.

“This is my passion,” he confessed. “I don’t see any way to make money from it. But I’ve been lucky enough to make a good living without worrying whether this will sell. Hopefully, movers and shakers will pay attention and read the book. I know I’m running against the odds and now I’m at the foot of Mt. Everest with a long climb up. But it’s worth it to me.”

Read the article on medcitynews.com 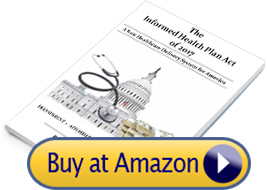